The terror and the appeal of twitter is its speed. It’s one of the reasons that I used to like it and a reason I eventually gave it up. It often seems that something happens and everything that can be said about it (and quite a few things that shouldn’t be said) is said almost immediately. Someone bloops a hit to left field and within seconds there’s charts, graphs and comments. Before the runner has even reached base, arguments have emerged and been settled.  It’s a bit much. It seems, somehow, anti-thought. It’s as if things haven’t even been processed before they’ve been discarded. Whether the conclusions are right, wrong or in between (they’re probably all of these things, all at once) they’re more or less meaningless. They’re writ in water. One just moves on to the next thing. Faster and faster. They rush into the future. The season’s winners and losers are projected before the first pitch is even been thrown. It must be right. Here’s a chart.

Handmaiden to that, is a kind of death. You can feel your originality being killed. Why make a joke that’s been made thousands of times already? Or an observation that someone else already has already made? You don’t get the pleasure or pain of struggling towards these connections. You simply read them. Retweet them. It’s as if the functioning of your own mind has been externalized. You become a spectator to your thinking. Disconnected from yourself, you read yourself. Your thoughts may even appear in tweet form. They become functions of character limits. Of the things you cannot say. Other things appear to become obvious. You forget that, perhaps, they are not. And, if they are obvious to you, perhaps they are not obvious to everyone. People have different feeds. What is obvious is often as much a product of what is absent as what is present.

I don’t point this out to adopt the position of ‘old man shouting at clouds.’ (If I wanted to do that, Twitter would be the place.) Rather, it’s because the thing that I’m going to point out, comes from Twitter, has been discussed there, and is probably already considered ancient history. But it’s only from a few days ago. And it’s the sort of shit that shouldn’t be casually disregarded. Although most of what needs to be said about it has been said and was said quickly, it still can’t just be tossed aside and moved on from. Doing that only creates the next destination, which will be the next iteration of this shit. This shit is part of a larger picture and we (at least, I) need to linger a while longer on the toilet. 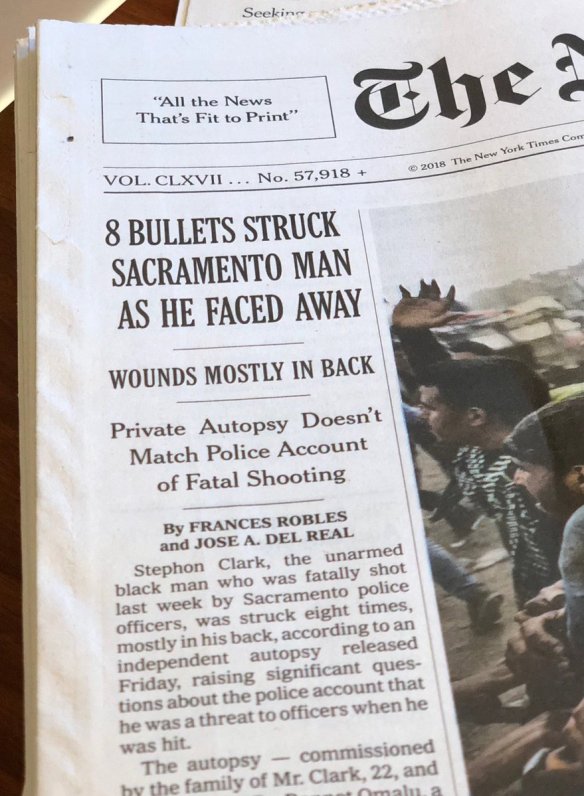 It came from Brent Staples who asked “When do we call this murder?”

That’s a good question. I wish I knew the answer. Soon, I hope.

But, aside from that, I would like to point out something else. It probably jumps out at everyone who writes but it might not be so obvious to those who have other, more sensible, ways to annoy themselves. Take a moment and look at that headline.

“8 Bullets Struck Sacramento Man as He Faced Away.”

This headline is really bizarre. It’s not neutral. These words take a side and they don’t want you, the reader, to know it. Let’s look at how this is accomplished.

Although victim-hood is itself defined by some form of lost agency, here it is the victim and only the victim who is assigned agency. (“He faced away.”) The killers are erased. The bullets seem to come from nowhere. For all this headline says, these innocent bullets were just flying around the neighborhood. But that’s not what happened. These bullets were fired. We know by who. None of that is a matter of debate. It’s a clear matter of fact. The police shot this man. In the back. These are just the facts of the matter.

The correct, clearest and simplest way to write this headline would have been “Police Shot Sacramento Man 8 Times in the Back.” (I would argue that “African American Man” should also be used, considering, you know, the whole history of America. Depending on your politics and feelings about coroners, you might also want to lead with “Autopsy Says”) That headline would have been a neutral accounting of the facts. Erasing facts because they themselves seem to take a side is not ‘fair and balanced.’ It’s not the achievement of neutrality. It’s the erasure of neutrality’s possibility.

There’s an old chestnut about ‘dog bites man’ isn’t news but ‘man bites dog’ is. Consider how those are written. Compare them to this headline. This headline is ‘Eight Bites to the Back as Dog Faces Away.’ Where the fuck is the man? Why did the story vanish?

When the police finally appear, it’s in a sub-headline. “Private Autopsy Doesn’t Match Police Account of Fatal Shooting.” We’re two headlines in and the police are still not identified as the shooters. Here, they are people who gave an account. They are in their typical and accepted role as witness or investigator. One has to get into the article itself before one learns that they shot the man. And, when you do learn that, you read that that the man “was fatally shot” by police, not that police shot him. He was shot.

At that moment, if you’re paying attention, you have to do a “wait-what” and start reading backwards to put the shit together. The police account differs from the autopsy and the police were the shooters? Had this been written correctly, you would have immediately suspected the police of lying. As it is, you now have to read between the lines and carefully deliberate before you blame. Most people don’t read like that. Even if a lot of them did, this is a fucking newspaper, not Samuel Beckett. It should be clear.

There’s only one possible reason to write a headline like this – to absolve the killers of any blame. To foreclose on the possibility of blame.

If a person wants to absolve the police, well I would disagree with that position. But I would hope that the position would be taken honestly and that the case for the innocence -or just the unguilt- of the police would be made through some sort of rational debate based in the actual best understanding of the facts. This shit, however, is not rational. It’s meant to absolve the police on the level of conception. Their absence, their lack, is not supposed to be noticed. You’re just supposed to blame the victim.

Bullshit can be facilitated in a lot of different ways. It can happen through the debilitating speed and super-presence of a machine like twitter but it can also be the result of the manufactured absences of the old media. But the goal of bullshit is always the same – bullshit exists to stop thought. And we’re not going to get anywhere unless we stop and think. That thinking has to be rooted in the facts. The police shot an unarmed black man in the back, while he stood in his grandparents’ backyard. They lied about it. They’re currently bribing the DA. That’s what needs to be thought about.

That’s what needs to stop.